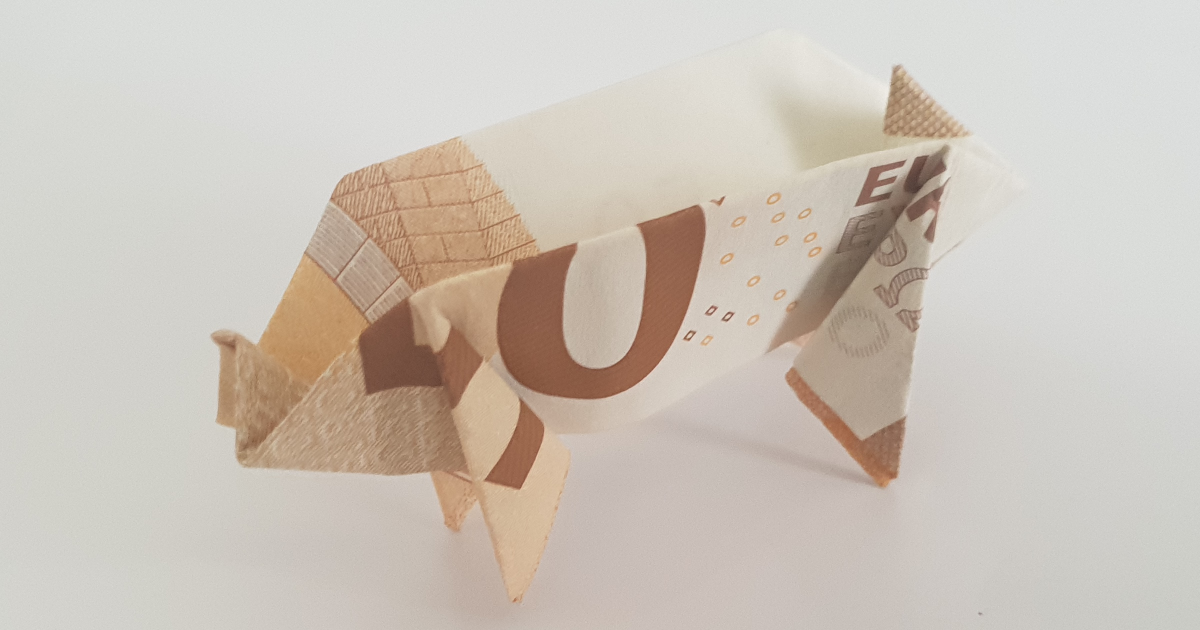 The pig (the boar) was a sacred animal among the Germans and stood for prosperity and wealth. It was considered a symbol of fertility and strength. Pigs are therefore lucky charms.

From a bill, a pig can be folded quickly with a few folding steps. Give a money pig and combine a monetary value with the symbol of luck. This is the perfect lucky pig!

Probably the most curious handover of pigs took place at a police station in the US. There, an American had the idea of ​​paying for his fine piggy bank ticket and folded a total of 127 dollar bills into pigs and brought them to the police station. (More information at paradisi.de)

In this guide you will learn how to fold a pig from a banknote. 10 € bills match the best color to the pig.

So this guide is also suitable for beginners, even if the pig is one of the more difficult banknote origami.

Fold the right part of the bill to the left so that it is exactly halved.

Now fold the leading edge onto the back edge of the bill.

Fold the back edge to the middle crease you just made.

Also fold the leading edge to the center fold.

Now fold the right two corners of the origami object towards the center line.

Then fold the left two corners towards the middle fold.

Now raise the upper left part of the bill, fold the corner towards the center line and then, as can be seen in the photo, the triangle to the right along the center line.

Repeat the last step with the front left corner.

Repeat steps 9 to 11 also with the right side. Now the origami pig is lying in front of you like in the photo.

Fold the lucky pig back at the middle bend and place it in front of you.

Now bend the triangles in the middle, so that they are perpendicular to the front line. They form the legs of the pig. Turn over the object and repeat these steps.

Now fold over a little bit of the left end and release the fold again.

Now open the pig and push the tip inwards. This photo shows the origami pig from above.

Now fold the bill together again. Lay him flat in front of you.

Now fold the right side of the pig so that the edge of the leg comes to rest. Undo this folding.

Open the pig and press the tip inwards as in step 17 ..

If you bend over a bit on one of the two sides a bit, the tail of the money-pig arises.

Done the pig is out of a bill! Glüksschwein!

How to fold a pig out of a bill - video tutorial

Here you can see the video tutorial, after which the American folded the pigs out of dollar bills, which he then brought to the police station.
In the end, it clearly shows that the folding of the pig takes much longer than the unfolding.