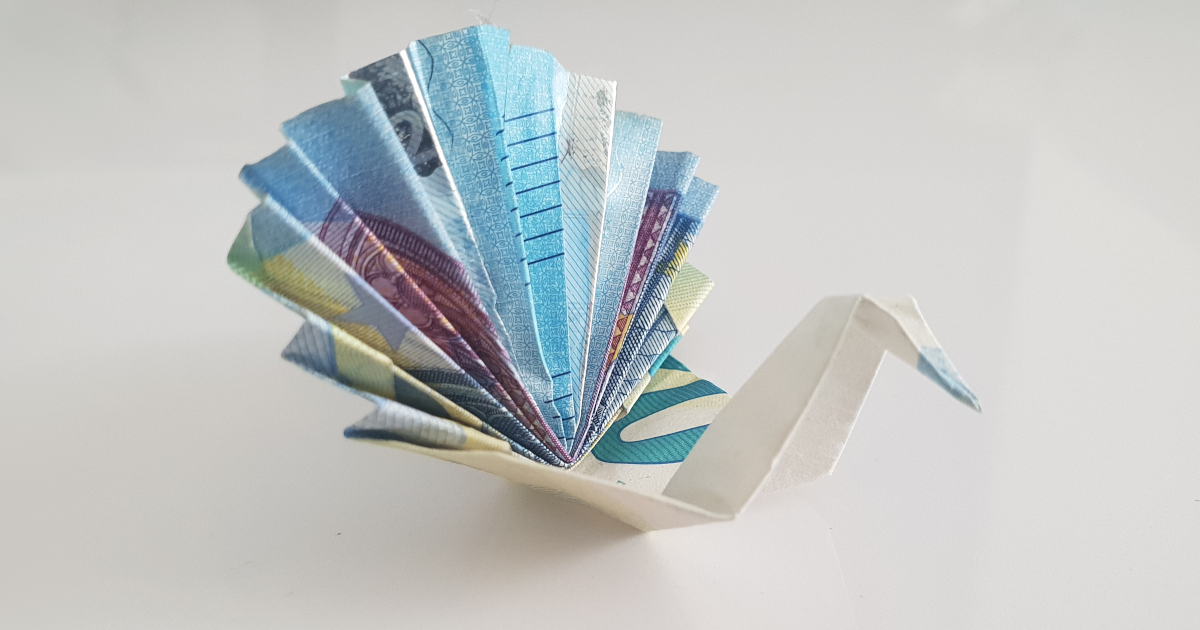 Why do you want to fold a peacock out of a banknote?
In the peacocks, the males are considered the oldest ornamental birds due to their eye-catching appearance. They were already mentioned in ancient times. Peacocks are loyal to their location and are now kept as pets worldwide. Originally the pretty animals come from India and Sri Lanka, In India he is still the national bird today.

In mythology, the peacock is a symbol of beauty, wealth, pride, love and passion, but also immortality and arrogance.

If you want to fold other animals out of money, then take a look at the overview page Animals from banknotes

How to Fold a Peacock from a Banknote - Instructions with Photos

With this photo guide, you can easily fold a peacock from a normal Euro note. An 20 Euro bill is perfect for folding the peacock because its blue color is very similar to the colors of the peacock.

Fold the bill in the middle back so that the leading edge comes to rest on the back edge.

Undo the last fold. The banknote now has a folded line in the middle, which serves as a guide for the further steps.

Now fold the two left corners towards the center line folded in the last few steps.

Now, just as in the last step, fold the two left corners towards the center line.

Fold the tip to the right. The edge is pretty much where the two peaks meet at the midline in step 5.

Turn the origami object over again. If you did the last fold correctly, your banknote now looks like the photo.

In the next steps you fold a few folds for orientation. Halve now the Gelschein.
Fold the right edge to the left edge.

Halve the bill again. Again, fold the right edge to the left edge.

One last time fold the right edge on the edge to the left.

Undo the last three folds until the bill is across again.

Now fold the right edge to the left until it comes to rest on the first fold.

Turn the bill around. Now fold the right edge to the left again to the next fold.

Repeat these steps until the fold has reached the last auxiliary fold.

Now the neck and head of the peacock are folded. To do this, fold the left tip backwards. Make sure that the edge, which has just pointed forward, is approximately parallel to the right edge.

Open the origami and fold the tip inside. To do this, push the origami inwards at the midline.

If you now compress the object again, it lies as in the photo in front of you.

Now the head is folded with the beak. Flip the tip to the left.

Undo the last fold, then open the neck and push the beak on the middle edge to the left.

The peacock is almost done. In this step you open the wheel of the peacock. There are two ways to connect the wheel in the middle:
Either you make a kink with the two middle ends of the bill - as shown in the photo. Or you take a small piece of tape and glue the two sides together.

Finished is the beautiful peacock from a Euro note!
Have fun after the tinkering!