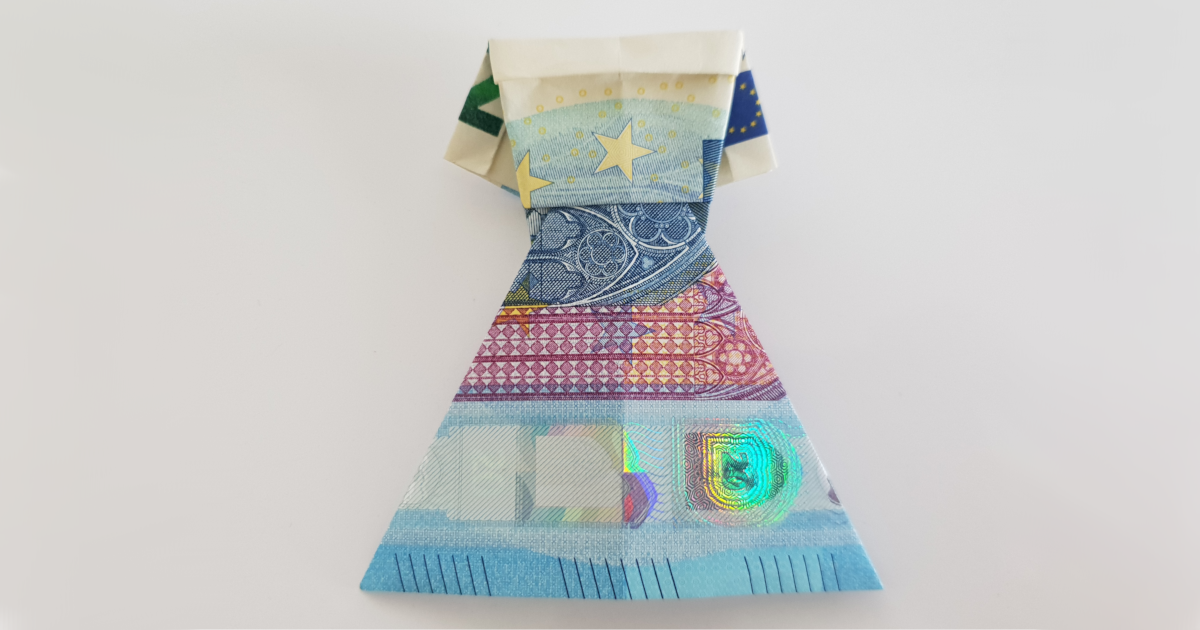 Whether you want to donate money for a wedding dress or a wedding, or want to beautify a coupon, a money dress is a creative option.

You do not like this dress? Then maybe this guide is for you:

This tutorial shows how to fold a great bridal gown from a banknote!
Content: description, text, photos, video
Needed: 1 banknote

How to fold a dress from a banknote - instructions with video

This video shows how to fold a dress out of a banknote. There you can see how easy the handles are to fold the dress. Just look and imitate!

In the following photo tutorial we show again step by step how the dress is folded.

How to fold a dress from a banknote - instructions with photos

With the help of this guide, you'll learn how to make money out of a pretty dress.
Each step is described in detail. And yet the dress is not necessarily suitable for beginners. Fold the dress to the rehearsal with some old bills before you take a banknote to make a cash gift.
When folding, pay close attention to the position of the bill, so that at the end a border on the dress is created.

Fold now the left edge of the bill in the middle to the right on the right edge.

Now fold the right-folded part to the left again. It is not necessary to keep an exact measure, the easiest way is when the kink occurs in the left third. This fold determines the ratio of upper to lower part of the dress. Here's a little experimenting. Pull the fold with your fingernail.

Then turn the bill over.

Now fold the front edge to the back edge. This auxiliary fold serves to mark the middle.

Swing the back flap to the right. The fold must be made so that the kink goes from the middle to the fold resulting from step 2 on the edge.
Repeat this folding step on the front side as well.

Repeat this last step with the front page as well.

Fold a strip to the right on the left side.

Now fold a small strip on the left side to the right again.

In this step, the top of the money dress is folded. Again, a little tact and exercise is necessary again.
Fold the left back part of the dress slightly diagonally towards the middle.

Repeat the last step also with the left front part of the banknote dress.

In the next three steps, the sleeves of the money dress are folded.
Fold the front part, which has just been folded to the middle, away from the middle again. Depending on how you do the folding, a larger or smaller sleeve is created. Simply flip the bill to see what the sleeve looks like.

Fold the left back part over the just folded sleeve.

Now also fold the left back part away from the middle to make the second sleeve.

Turn the bill around.
To make the money dress look even more real, you can pluck something on the collar to create a cleavage.
Finished is the folded money dress!