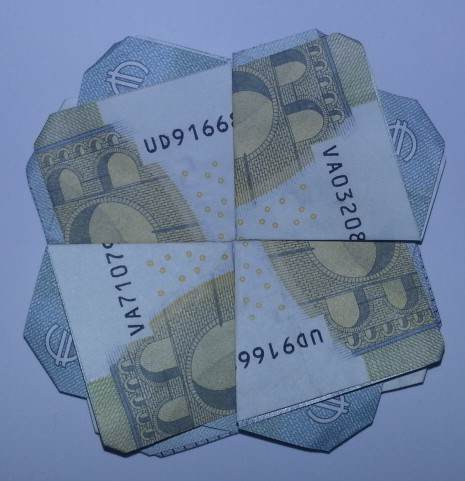 The four-leaf clover is a symbol of luck. What could be more natural than giving away a cash gift in the form of a shamrock?

With the help of this guide you will learn how to fold a simple shamrock from four identical banknotes. At the same time, this tutorial shows how to fold a simple money heart in just three steps.
You only need four identical bills and little knowledge of origami. The shamrock is very easy to fold.
The fresher the bills, the easier it will be for us to be cleaner the leaves. But even with used bills or bills that have been folded before (see photos), it is possible without problems to fold the cloverleaf.
Each photo shows two steps at a time.
In the video you can see how easy the individual steps can be folded.

How to fold a shamrock from bills - video tutorial

If the photos did not show enough of the folding techniques, here is the video that shows that it's really easy to fold a shamrock out of the bills.

How to fold a shamrock from bills - instructions with photos

Put the bill right in front of you.
Then fold the right edge of the note flush on the left edge.

Fold the bill as shown in the photo, folding the left front corner over the fold to the right.
Then fold the back part forward. Here, the rear edge comes to lie on the front.

Arrange the four banknotes in a circle and the clover is ready.
It is recommended to secure the cloverleaf on the back with two adhesive strips. Or they stick it directly on an envelope or a greeting card.