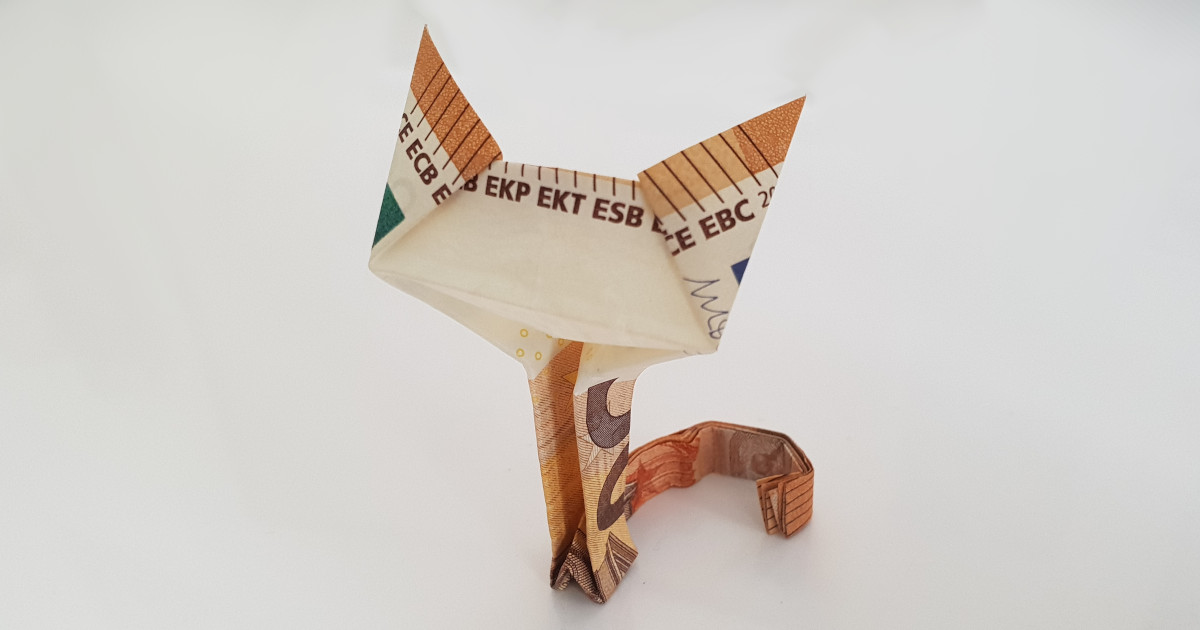 Folding animals out of money - Instructions and tutorials with photos
6. May 201922. May 2019 Bill Falter 1 comment Pet, Kätzchen, cat, Miau, Tier

This guide to folding money shows you in many pictures how a nice cat is folded out of a bank note.

Cats are popular domestic animals. Some people even develop a tick and collect everything that looks like a cat. It does not matter what material and what size the cat is. The more cats the better. And this cat is especially cute, because - just like babies - the head is disproportionately large in relation to the body.

At first glance, the cat looks very difficult to fold. This way is not correct. With a bit of skill and goodwill such a money cat is simply folded.

Origami beginners also use this photo guide to fold a pretty cat from a banknote. With a little folding exercise, the Euro Cat manages a little faster. My tip is therefore: About the steps before with a tailor-made piece of paper, if you do not have enough bills to practice.

The cat is wonderful as a gift or just for decoration at home. If it gets financially tight at the end of the month, the cat can also do something good.

This photo tutorial is very detailed and therefore very easy to fold even for beginners. Especially origami novices get with this great photo guide quickly a result that they can hold proud in their hands.

In the following video you can see all the steps exactly, so that you can simply fold the cat out of money:

How to fold a cat from a banknote - instructions with photos

Fold the bill so that the leading edge comes to rest on the back edge.

Now fold the folded edge back onto the front edge.

In turn, fold the back edge onto the front edge. Pull all folds with your fingernail.

Undo the last two folds! The note is now again as after the first convolution before you. The edge is in front of you.

Fold the left front corner over to the back edge.

Make all folds undone again, so that the bill is again right in front of you.

Now fold over the left side so that it comes to rest on the top of the triangle folded in step 7.

Fold from the corners of the bill together to the point where the longitudinal and transverse folds intersect.

Carefully fold the bill as shown in the picture.

Lay the bill again in front of you, so that the tip points to the left behind.

From the right, fold the leading edge to the back edge.

Fold as in the penultimate step from the right now the rear edge forward on the front edge.

Take the right part in your hand and pull the left part apart.

Now it gets a bit tricky. Fold the end of the back folded edge inwards.

Also fold the end of the front folded edge inwards.

Turn the banknote origami over.

Fold the middle part of the money cat's head towards the middle.

Turn the banknote over and fold the thin end to the side.

Undo the last fold and open the thin part.

Fold the banknote cat backwards at the fold that has just been created.

This step is the most complicated step of the banknote cat. As you fold the bill back at a right angle, you must press the fold up front to imitate the cat's paws.
Make sure that the tail of the cat is really folded backwards at a right angle, because otherwise it can not be set up.

Roll the tail of the cat.

Done the cute cat from a folded bill!

One thought on “Folding cat from a bill"