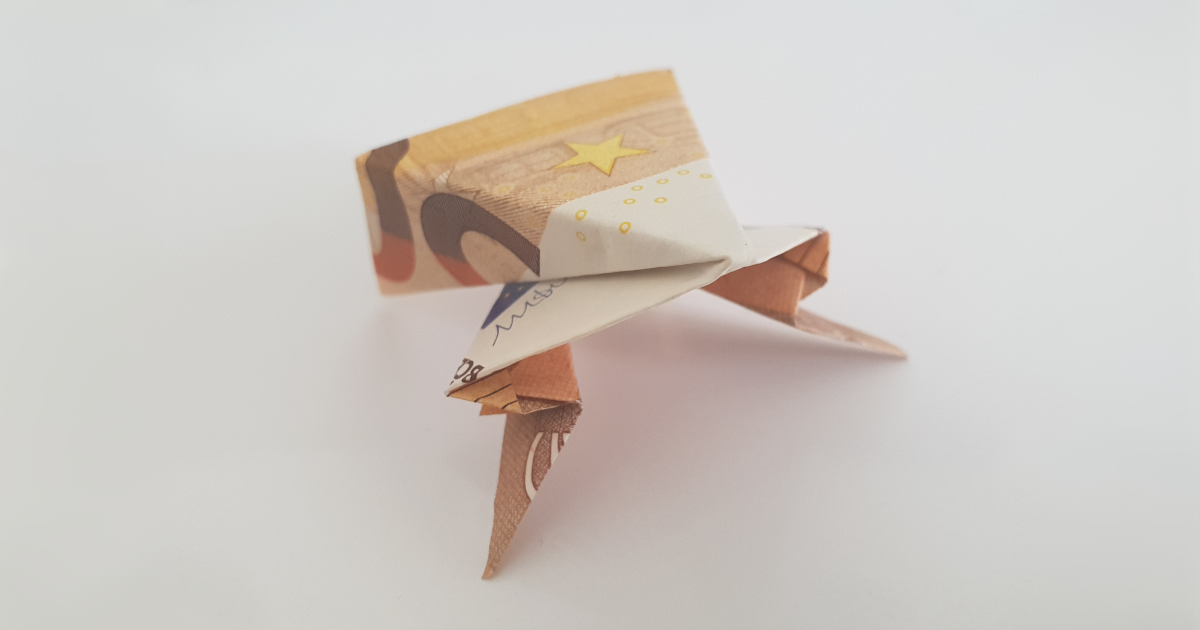 Animals are well received by most people. Therefore, it makes sense to give away money in the form of animals.

This guide shows in detail how to fold a frog out of a banknote.

All you need for this money frog is any banknote. For the first attempts, it is advisable to take a larger bill (such as 20 or 50 Euro). With a little practice, the frog will succeed with the small 5 € bills.

The frog is in the first folding steps like the Fish folded.

How to fold a frog out of a bill - video tutorial

This video shows you how the money frog is folded out of a banknote.

With only one bill, this money frog can be folded. This photo tutorial shows the necessary steps.

Flip the left side to the right. The folding takes place at the front edge at the top so that the rear edge is flush.

Open the fold from step 2. Done is the first auxiliary fold.

Now fold the right back corner to the front left corner. This fold is another auxiliary fold.

Therefore, the step is also undone.

The square is now folded transversely in the middle to the right.

Now press back and forth in the middle of the square. With the help of the just created auxiliary folds, it is quite easy to merge the pages towards the middle and ...

Now the legs of the money frog are folded.
Fold the front tip of this origami frog back to the center of the triangle.

Repeat this step with the back top tip and fold it to the middle of the triangle.

Now fold the front tip from the center back to the front, so that the two edges lie flush over each other.

Repeat this step with the rear tip.

Now fold the front tip to the left, so that the right edge comes to rest on the middle of the triangle.

Fold the back upper part of the bill frog forward.

Now also fold the rear tip to the left.

Flip the top part back to the back.

Now turn the banknote frog over and adjust the hind legs so that the finished frog is formed.

One thought on “Fold out frog from a banknote"