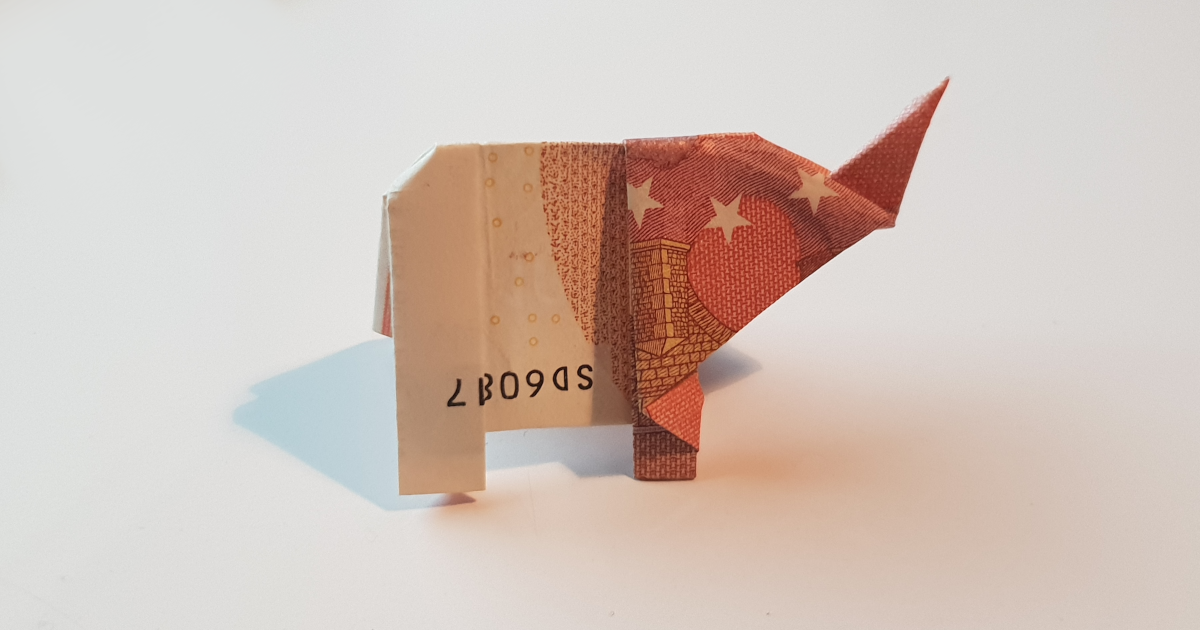 Animals are popular gifts. Elephants are special animals that, because of their imposing size and nature, are considered symbols of power, happiness, wisdom and peace.

This guide shows in clear steps how a nice elephant is folded out of a bank note. With a 10 Euro bill, the famous pink elephant will be presented as a gift.

Attention:
This money-elephant is not easy to fold and not necessarily suitable for origami beginners!

With this guide, you can fold a money elephant. If you follow the sequence and pay close attention to the photos, it should be easy for beginners to fold this elephant.

Lay the note lengthwise in front of you.

Fold the bill in the middle to the rear, so that the front edge comes to rest on the rear edge.

Unfold the bill again. The resulting kink serves as a middle orientation in the further steps.

Now fold the two right corners towards the middle.

Fold the pages of the bill inside again. Make sure that this time the corners are not folded to the middle line. As a guide, the rule of thumb is that the corner should be approximately halfway between the centerfold and the edge of the glow.

Now fold the tip to the left.

Now fold the left part to the right, so that both edges are flush with each other.

Turn the bill over again.

Fold the lower part of the bill to the left. This creates a small overlap. These become the front legs of the elephant. Make sure that the overlap is not too thick, but not too thin. In the next step, this overlap is halved again and thus to the final width of the legs.

Fold the overlap to the right.

Now fold the tip to the left.

The part of the bill, which has just been folded to the left, is now folded back to the right as shown in the photo.

Now the hind legs of the elephant are folded. To do this, fold the left edge of the ticket to the right

Turn the money elephant over again and fold over the two upper corners.

Put the two triangles on and pull the middle part upwards.

Pull the middle section backwards until it rests again on the banknote. In this step, make sure that the folded triangles are flattened without tearing. This gives the feet of the money-elephant.

Repeat the last steps with the back side as well.

Now fold the elephant at the midline. If the left hind legs have become too thick, then undo the last fold.

Fold the left edge to the right so that the hind legs are exactly the same thickness as the front legs.

Fold the elephant back together at the middle fold.

In order to form the trunk of the elephant, two small folds must now be carried out at the top. To do this, fold the tip diagonally forward ...

Turn over the object and fold over the last two folds in the opposite direction.

This is the most complicated folding step and requires dexterity. The trunk is now folded with a counter-fold in itself.

Fold the elephant back together at the middle fold.

To give the elephant a more realistic look, you can press in on the middle fold the left rear corner. That's how the butt is shaped.

How to fold an elephant from a bill - video tutorial

This video tutorial shows exactly how the elephant is folded:
Helpster: Origami Elephant