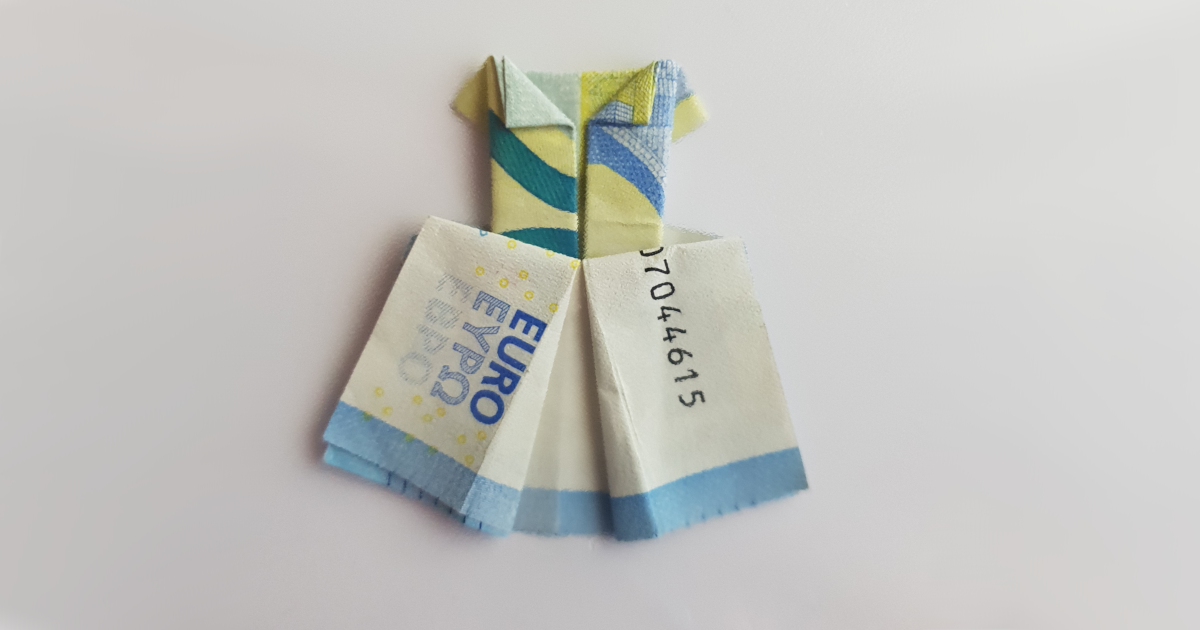 This photo tutorial is very detailed and therefore very easy to fold even for beginners. Especially origami novices get with this great photo guide quickly a result that they can hold proud in their hands.

Would you like to learn how to fold an origami dress from a euro note (or other banknote)? I'll show you how it's done.

This dress can be folded quickly and easily and can turn a gift of money (or as a tip) into something creative and special. It is folded from a single bill.

Do you soon have weddings from friends or family? When they ask for money (which seems to be more and more of a trend), why not fold the money into a wedding dress or a groom outfit?

Do not be put off by the length of the following instructions. The folding of the wedding dress is actually quite easy! The only reason the manual looks so long is that it consists of many photos because the process is broken up into many simple steps.

This photo tutorial consists of many simple steps. It is kept so simple that origami beginners can easily fold this wedding dress.

Fold the bill from right to left so that the right edge on the left edge comes to rest.

Now fold the back edge forward on the front edge.

Fold the front edge to the just folded center fold.

Fold like the back edge on the folded middle fold.

Turn the bill around. The edges of the folds now point upwards.

Now fold the front edge onto the rearmost auxiliary fold.

Now fold the edge of the folded-back part forward so that it comes to rest flush on the front edge.

Fold the back edge to the front edge of the bill.

Fold the folded forward part back so that the edge comes to rest on the back edge.

Now fold small triangles on the left side from the center outwards. These make up the neckline of the bridal gown. Make sure they are not too big.

Turn the bill around. Kink on the left now the end a little bit around. This will create the collar of the dress.

Fold the right side of the origami dress to the left. The folding does not take place in the middle, but much further to the left - about one third of the folded bill.

Fold the piece folded to the left in the last step to the right again. This part of the bill will make the skirt of the dress. Pay attention to the proportions in this convolution! This fold essentially determines the look of the wedding dress!

Pull the upper front right corner forward and then push the bill flat again. The further you draw, the wider the skirt of the dress becomes.

Repeat the last step with the back right corner: Pull the upper right corner behind and press the banknote flat. Make sure that you extract this part as far as the part in the previous step!

Now comes a little tricky part: Fold the back left part of the dress towards the middle. This forms a triangle as in the photo.

Also fold the left front part of the money dress towards the middle.

In this step, a sleeve of the bridal gown is folded: Fold the back left part as shown in the photo at an angle.

As in the last step, fold the front left part diagonally.

Finished is the lavishly designed wedding dress from a folded bill!

Unfortunately there is currently no video available that shows all the steps from the photo tutorial. Subscribe to my channel to stay!